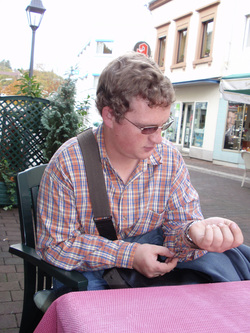 Adam graduated this year (2011) from the University of Bath with a BA in Modern Languages & European Studies (French & German), and will then progress to do Teacher Training to teach those languages at secondary level. In his spare time, Adam enjoys Reading, Travelling, and being a member of a local St. John Ambulance Division. He also works part time as a supervisor in a local supermarket. His main loves are, languages (in case you couldn't guess), the cats, and the parrots.

Adam has since passed his Teacher Training Course and has secured a job teaching French and German at Ansford Academy in Castle Cary, commencing September 2012. In August, he will get his car on the road (A Suzuki Swift) so that he can drive there. If that proves too much he will look for some sort of accomodation in or near Castle Cary.