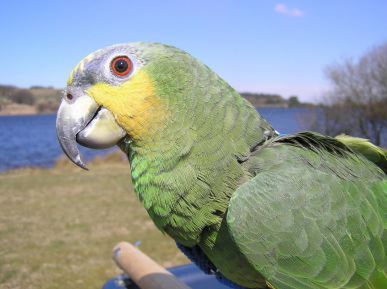 Still regretting rehoming Bobby, I was keen to get another Amazon. I saw one advertised that was an Orange Winged Amazon named Kenny who was 2 years old and had been owned from a hand-reared baby (dob:- 1/4/2000). The lady was selling him because she had just given birth herself and couldn’t spend enough time with him. I fell in love with him but we were about to go to France on holiday so she agreed to keep him another 2 weeks for me. When I brought Kenny home he could already say Hello but now his vocabulary includes, Hello, Hello Kenny, Good Boy, Pretty Boy, Clever Boy, Kiss, Who’s a Pretty Boy, Who’s a Pretty Good Boy and various other phrases. I always prefer to take birds in their cages as it gives them some familiarisation when they come to a new home but I felt Kenny’s cage was too small so we fairly quickly got him a new bigger cage. However, we are keen caravanners and his old cage would just fit through the door of our caravan so we started taking him on holiday with us. We also bought him a harness and although it took two of us to put the harness on him, once on, he ignored it all day and sat on my finger. So he came out at Breakfast time and went back in his small cage in the evening just to sleep. Kenny has been coming on holiday with us ever since and in those 10 years has been to various parts of the UK, France, Belgium, Luxembourg, Germany, Switzerland and Italy – a truly well travelled parrot!