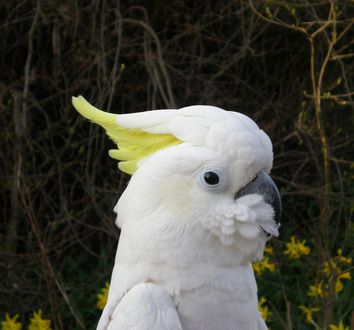 Next I decided I would like a Cockatoo. We knew the noise they made and were prepared for this. I found a 4 year old Medium Sulphur Crested Cockatoo called Coco who was being sold (probably because of the noise – a fate which befalls a lot of Cockatoos). (dob:- 8/7/2001). As we were happy to accept the noise we decided to buy him. He was later sexed as a male and the name suits either sex. Coco was like any other Cockatoo and was just stupidly cuddly and took straight away to a harness. Coco came on holiday a couple of times but then we felt his noise level on a caravan site was too excessive. He still regularly comes out for walks around home, on his harness (well when I say walks I mean carries!!!). Unfortunately Coco reached adolescence and was becoming quite vicious towards me. He was however quite placid with my daughter. I wanted to sell him for breeding but my daughter couldn’t face losing him so he is now very much her bird and lives in a large cage in her bedroom where she spends a lot of time watching TV and studying, so he is not left alone all day. 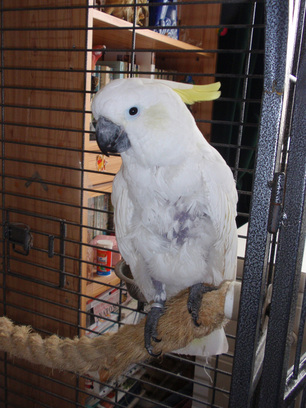 Coco - showing off his 'thin' patch ( a bit like Dad's!!!)
Saturday 2 April 2011 was a very sad day. Stacey finally had to admit defeat with Coco. His plucking was getting worse and she just didn't have the time to spend with him that he needed. He wouldn't take to me at all and because of my blood thinning drugs, I just couldn't stop the bleeding when he bit me (which was often and resulted in copious bleeding!). We had spent several weeks trying to find a breeder who would take him for breeding but failed. There don't seem to be many MSC Cockatoo breeders in the UK who advertise! In the end we found Michelle and her daughter Shona who said they would love to take him on and spend the time with him that he needed to try to stop him plucking. We firmly believe that with time spent with him, his plucking would stop and with Michelle being around all day with a great and passionate love for parrots, combined with Shona's (aged 12) growing love for all things parrot, this was the best option for Coco. We didn't sell him - merely gave him away for the chance of a better home. When Michelle and Shona came to collect him they made a point of spending a couple of hours getting to know Coco with Stacey and also getting to know Stacey. Stacey is convinced this is the best possible new home for him and we all wish him all the best for his future happiness. 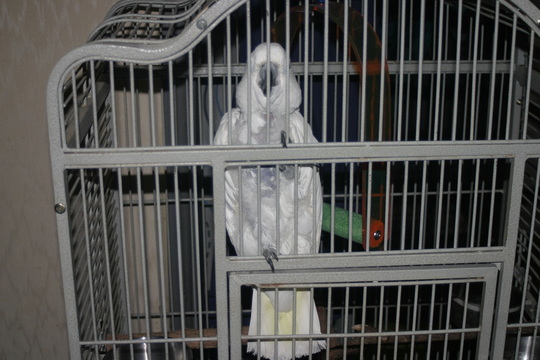 Hello again, Coco.
In the summer of 2014 I received a voicemail message from a Vet in Yorkshire asking me to ring about my Cockatoo. I was VERY puzzled as I only had 2 Cockatoos and they were both home and well. So I rang, thinking there must be some mistake and was told they had found this Sulphur Crested Cockatoo who kept saying Hello Coco. They Micro-chip checked it and found it was registered to me - hence the phone call.


We were thrilled because the Rescue he had gone to had collapsed and we were not able to get any updates. No-one had reported him lost so we suspect he might have been set free. Still he was safe and well and although we weren't in a position to have him back we wanted to keep some contact. I arranged for a colleague in Birdline to collect him and he was put in a Safehouse and it was my intention to bring him into Birdline. However, it soon became evident that Coco needed an aviary environment (he may well have been in an aviary before he escaped). We were put onto the Cockatoo Sanctuary in Suffolk and Stacey made contact with them. They would take him in but they wanted some health checks done (which Stacey paid for) and they wanted a donation. This was all sorted and plans were made to transport him. Unfortunately the travel convoys kept falling through but in early September 2014 he was taken there and settled in well. During his time away from us his plucking got worse but we just hope he is a Happy Plucker in his new Aviary home.