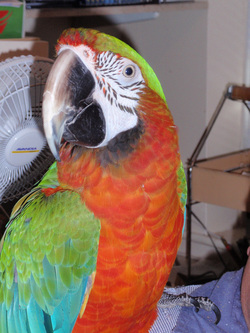 Rocky
Rocky is a Harlequin Macaw (a cross between a Blue & Gold and a Greenwing). She is a DNA sexed female. She has the black facial feathers and Tail of a Blue & Gold; the horn colouring in her beak and the wings of a Greenwing and her chest is Orange - a cross between the dark Red of the Greenwing and the Yellow of the Blue & Gold. She is an absolutely stunning bird! We bought her from Lauren who had to sell her on Doctor's orders as her little lad had constant breathing problems. We collected Rocky on 8th July 2012 and she is 7 years old so, in time honoured tradition, we will treat her birthday as 8/7/2005 as we don't have a hatching certificate.

Rocky has 4 other Macaws to get to know. Well, 3 actually because Max (Scarlet) who we have had for some 23 years won't get to know any of the other Macaws. She is the leader of the pack, or so she thinks! Of the others, Phoebe is a stressy one and is a bit unfriendly to all the others but we did take her on holiday with us at Easter with Georgie (Greenwing) and they calmed down a lot but I have to say she is a bit anti Rocky at the moment (perhaps she is jealous of her fully feathered chest!). Rocky does get on with Charlie (Blue & Gold) and she really loves Georgie (Greenwing). Perhaps she remembers her mother? She is often sidling up to Georgie and the two of them can often be seen feeding each other. When we are in the lounge with the Java Tree; Charlie usually sits on the back of my chair and the other 3 sit on the Java Tree and once Phoebe has settled down and got over her stressy behaviour, they are fine together.

Rocky has really settled in well and is happy with all of us humans (which is brilliant as she will not be neglected when I am away). All the Macaws come out at mealtimes and all have their own stands in the Dining Room/Conservatory. Rocky is a good eater especially with Potato and Pasta and she loves her bit of protein in the form of meat or fish! She is currently getting into a routine whereby her seed is removed after breakfast when she has her fruit, and replaced at tea time. She is very artful and takes even the most obscure opportunities to get to be with Georgie which is really nice. They are just bonding well (but there is no chance of pairing as Georgie is too young and they are both females!).

Rocky is the only one of my five Macaws who can fly. For such a big bird in, what are at best, small rooms, she is exceptionally graceful as she flies and every time (so far!) she has managed to go around the 5 hanging lights with glass shades in the lounge! At tea time, she soon gets fed up on her stand and wants to go to Adam's shoulder and share his tea!

Rocky really is a lovely and welcome addition to the flock! 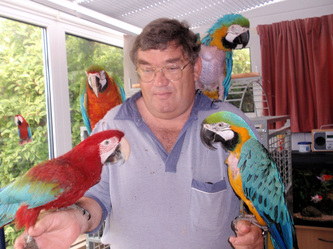 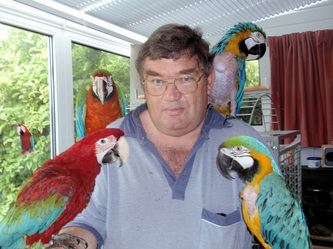 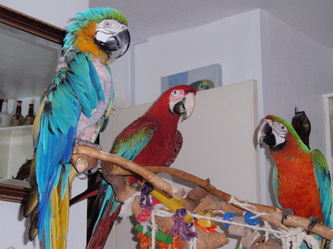 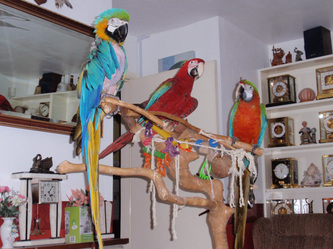 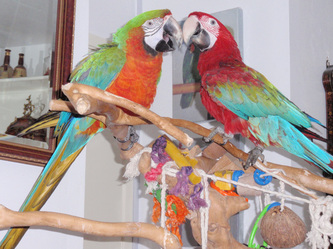 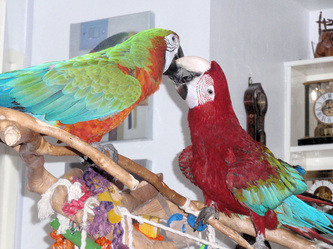 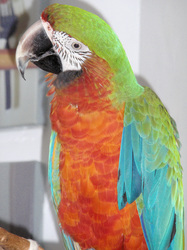 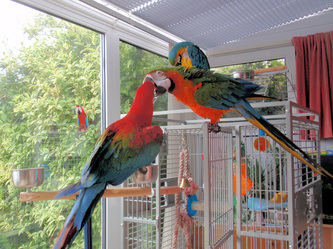 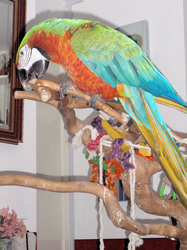