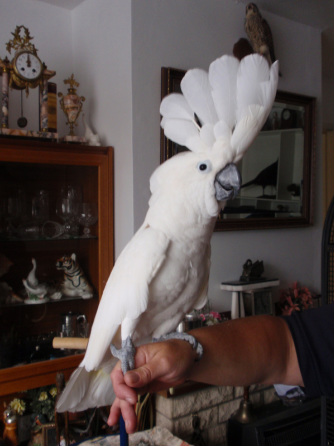 I really missed Coco’s affectionate side and decided to try to find an already adolescent Cockatoo who would take to me. After quite a search and lots of travelling we finally found a 5 year old female Umbrella Cockatoo who was devoted to her male owner and absolutely hated his wife (dob:- 2/9/2004). We went to see her and spent quite a time with her and she took to me and my wife. We left her a while and revisited and then decided she was the bird for us so we took her home. On the way home (about an hour’s drive) she hated it so much in the carrier that we stopped after about 5 mins. and she spent the rest of the journey being cuddled by me while my wife drove! We immediately had her sexed and she came back as a male so we quickly changed her name from Tillie to Billie (which he says well now) and rehomed him into a more suitable cage. Like Coco, Billie took to a harness straight away and often comes out on his harness for walks (carries!) with us. 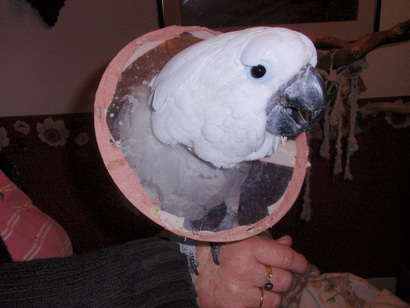 This is a kind of warning to all you parrot people out there. A week ago we heard Billie wheezing. I had planned to get the nebuliser out and nebulise him with a mixture of 1part F10SC:250 parts water however, in the meantime I detected his wheezing was getting worse. I made the decision to take him to see Neil Forbes (Avian Vet) and I'm so glad I did. Billie coped reasonably well with the 45 minute drive to Swindon - still wheezing but not getting into distress with it. Neil agreed to anaethnetise him and pop the "telescope" down his air way to see what was going on. When Neil came back he told us that Billie had Aspergillosis and our hearts sank as we know this can be a killer disease. Neil also said that surgery wasn't possible in this case. However, he had put a tube in through his left ribs to help him to breathe and was going to prescribe some anti-biotics due to the open tube and the risk of infection and some new-ish drug that should get rid of the growth. We then discussed where this could have come from as I consider myself pretty good on cleanliness and housekeeping. Neil said that most cases originate from poor quality seed and that you should always take a cup of seed from each new sack and examine every seed in that sample for Weevil holes which let in damp and encourage mould spores and also to crack open every single seed in the sample and look for mould spores. He also said that there are mould spores in the atmosphere and birds can cope with mould spores in that way BUT if they get stressed, then they cannot cope and the mould takes over and causes a fungal growth as in Billie's case. Now none of our other birds were affected and we do buy good quality seed (though I will start sampling it from now on) so I think it was brought on by stress. We have recently had builders in and as Billie is a good flier we kept him in his cage whereas he usually came out every morning. I didn't want any accidental escapes. I think this being kept in his cage is the stress that caused this outbreak. He could well have had this growth for some time but the stress just caused it to get worse.

The drugs prescribed were Ronaxan (the anti-biotic) and Voriconazole which is the new "wonder drug". Apparently this tiny bottle (about the size of a small tablet bottle) costs about £240 so it is not cheap. There is an avian vet in the US who used to specialise in surgery for this condition and who now only very rarely performs surgery - finding this drug much better. I have to say that Billie does seem to have improved a bit so we are hopeful that he may fall into the 80% of succesful treatments. We have to see if he is breathing normally by blocking his tube and if he is we can take him back to have the tube removed. Because he had a tube protruding through his ribs, he was fitted with a collar to stop him biting it and, because of this, we had to make several changes to his cage so that he could still access his food and water alright. He doesn't seem too keen on his seed at the moment so we are supplementing his fruit with baby food which he LOVES. I have him out every morning again now and whenever I walk past I give him a bit of chopped Walnut or Banana chip. The problem he has eating is that he picks the food up alright with his beak and then tries to hold it in his "hand" (foot) but because of the collar, he cannot get his foot close enough. He has certainly enjoyed being hand fed again!

PLEA TO INEXPERIENCED BIRD KEEPERS - This is a terrible disease which is a killer and is caused by mould spores. We have had a £750 Vet bill with another £400 still to come but we do not begrudge the money - we just want Billie fit and well again. BUT this disease is preventable. The majority of cases are caused by poor quality seed so please ONLY use good quality seed. Yes, it might cost more but you get what you pay for and if you can avoid this terrible disease (and £1150 Vet bills) then surely it is worth paying that little bit extra. Do NOT leave fruit & veg in your birds cage for too long - mould spores can so easily grow on this. Clean out the bird's cage frequently - mould spores can so easily grow on stale faeces. Wash the bars of the cage regularly - sticky juice from fruit can adhere to the bars from the bird's feet and go mouldy. Do NOT feed Monkey Nuts or Peanuts. Apart from being high in fats they grow underground and often have mould on them. At a recent training session, we went to the local Sainsbury's and bought some human grade Monkey Nuts. They were handed out a few each and we were told to examine them. There were black marks on the outside shell (which the birds put in their mouths to get the seed inside) which were mould. We then opened them and some of them even had mould on the inside. These were HUMAN GRADE Monkey Nuts not the poorer quality Monkey Nuts you get in Parrot Mix. So when you buy Parrot Mix, INSIST it has NO Monkey Nuts in it. Tidymix; AS20; and some Colonels are now manufactured without Monkey Nuts. PLEASE do take these precautions as this really is a terrible disease. 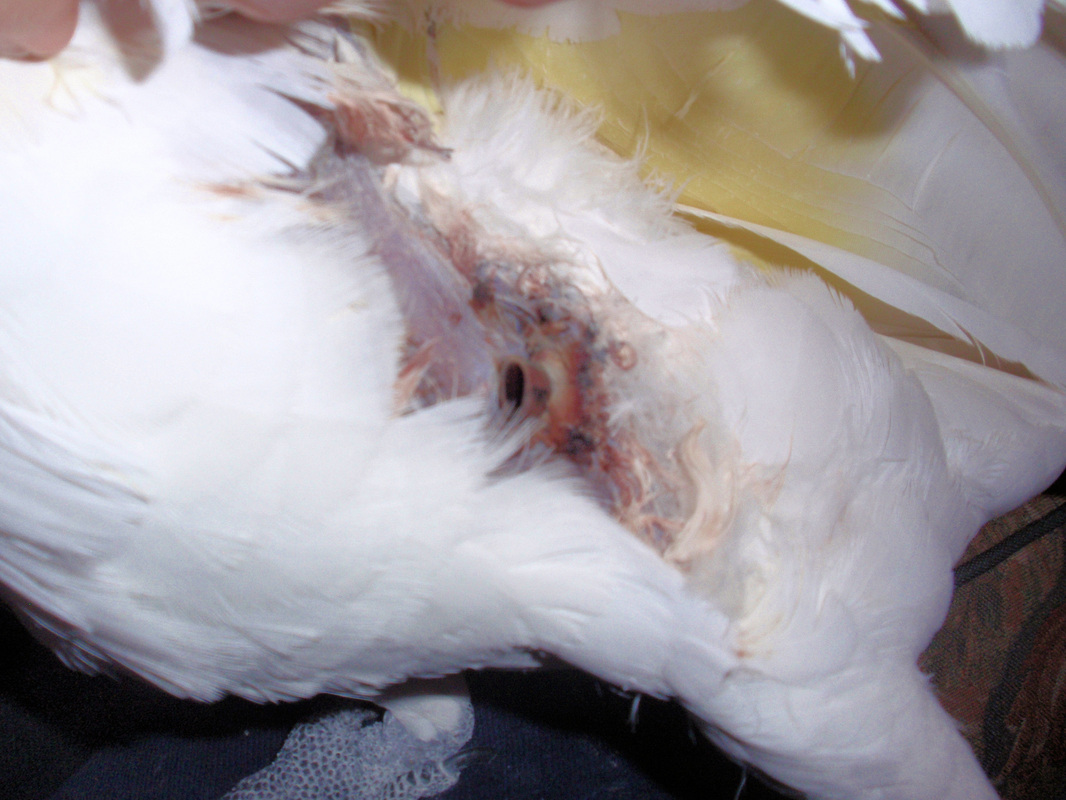 If you look carefully you can see the tube for Billie to breathe through. It is oval as it passes through his rib cage.