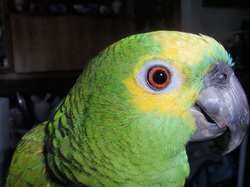 Bobbie II
This is Bobbie, a Blue-fronted Amazon. Bobbie came to us as Poppy, a believed female but when we had him sexed he came back a male. He said Hello Poppy but it sounded very much like Hello Bobbie so we made the decision to change his name to Bobbie. He is labelled Bobbie II as we once had a Bobbie, also a Blue-fronted Amazon, and getting rid of Bobbie was the biggest mistake of my life. So having another Bobbie in my flock is wonderful! Bobbie was born on 4/9/2008 and we have a hatching certificate. We acquired Bobbie on 4/12/2011 from a lady called Joyce in Middlesborough who loved him dearly but whenever her daughter visited, he got very spiteful towards Joyce so she chose to rehome him with us and we are very glad that she chose us. Gill and I had a week-end away and stayed overnight in Middlesborough before returning via London to collect Bobbie's new cage which we had just bought. It is a double cage and Joza lives in the other half of it.Bobbie travels well in the car so in the summer we hope to harness train him so he can come out with us. Bobbie comes out every night with the other 5 Amazons but is a bit overwhelmed. She is happy to sit on the back of my chair with Dolly and Joza but prefers to be either on Gill's Zimmer frame or on Stacey. Stacey looks a bit like Joyce's daughter and Bobbie loves her! This was one of the reasons why we rehomed Bobbie. He stands up to Ollie, who likes to think he rules the roost, but hasn't directly met Sydney, who does rule the roost (typical female!!!), yet! Bobbie is settling in well and, so far, has shown none of the spite he showed Joyce so we hope he feels much happier here.
Update

Shortly before we moved (early 2014) we took the hard decision to foster Bobbie. A couple approached us wanting an Amazon and Bobbie was very much a Lady's bird. As the female was going to be the main keeper, we decided to let Bobbie go. He is still owned by us; just fostered and we still get updates. We all wish Bobbie continued happiness in his foster home.