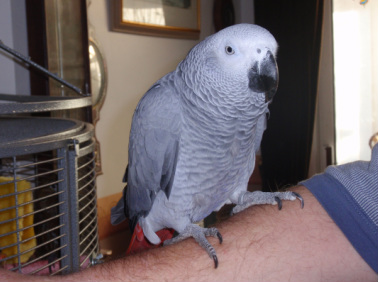 A few months later we were on holiday in Herefordshire, again with the 2 Amazons, when we saw an advert for an African Grey Parrot – a Man’s bird. As our African Grey, Suki, hated me and my son, I was tempted. As my wife offered to write down the details I knew she was also willing to let me have another! Only problem was where to put it at home. All of our birds except Coco are in our dining room. Parrots are social eaters and this way they all eat with us. The only problem was we had no room for another cage. I expressed an interest and was then told the bird had been sold. When we were back at home I received a text asking if I was still interested? Well, of course I was! So we set about putting our two Amazons in the same cage. They spent so much time together anyway that they took to this straight away and it gave us room for another cage! So we went to see Tahla (dob:- 7/7/2009) (a believed female which, on DNA sexing, actually turned out to be a female this time). Tahla took straight away to me and I was hooked. We put her in a travel cage, loaded her cage into the back of the car and in 2 hours she was in her new home. True to their word, she is a man’s bird. She is brilliant with me and my son but hates my wife and daughter; but at least we can now all relate to an African Grey in the home.