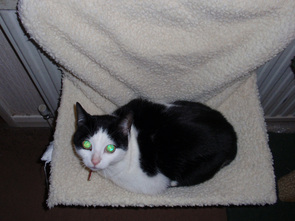 Mischief was the first of our cats. He was born in Summer 1999 and came from Devon. He is slightly overweight (Against my Daughters liking!) and is VERY lazy. He eats, sleeps, eats some more and sleeps even more. Occsaionally he will venture out to the garden to the toilet! He does have a morning walk to the aviary to check all the birds are OK with Stacey (Only in fine weather though, not in the wet weather we are prone to!) and then back to sleeping again!!! He is a little shy of strangers and will frequently hide under any duvet possible! He is a heat magnet and loves to sleep in front of the fire! Despite his weight, he is in fine medical health apart from a flea allergy!
Mischief passes away
In December 2013 we took the hard decision to have Mischief put to sleep. WE knew he was ill with a tumour on his brain and diabetes. We just knew the time was right. He was sadly missed.