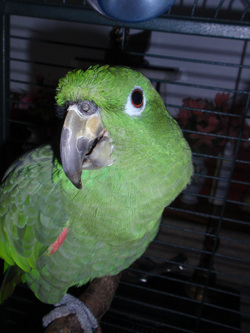 Ollie is a 3 year old (dob 01/05/2008) Mealy Amazon. His previous owner, Ian, had to pass him on because his own circumstances changed and he couldn't give him the attention he deserved. Unusually, Ian actually cared where Ollie went. I approached him with a sort of Rescue option but there was no way Ian would part with him for no money so we agreed on a rescue with a donation being made by me for all the fine work Ian had done in his 3 years of life. Those that know me will know that I LOVE Amazons and I didn't have a Mealy so this was a good opportunity for me. I am calling Ollie a "he" as he is believed to be a "he" but we are getting him DNA sexed so watch this space!

Yesterday (17/06/11) he went to the vets for a blood sample to be taken and whilst under anaesthetic, we also had a microchip implanted. The purpose of the blood test was to check for illnesses so he can be taken out of quarantine in the lounge and join the other birds in the bird room and also to establish "normal" readings so if he is ill in the future there is a normal range of blood results to use for comparison. Apparently he went under very quickly and came round very quickly and seems to have forgiven me for taking him there! 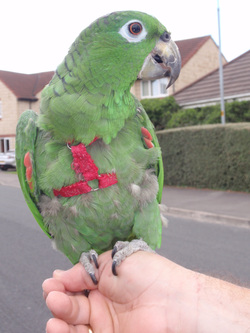 Today (19/6/11)we started Ollie's harness training. We started with a harness which was too big so then tried Tahla's harness that fitted perfectly. We'll get Ollie one of his own in time. It took two of us to put it on him (as it does with most of our birds) but once on he was very good. We took him out for about 20 minutes around the local Duck pond. He was taking in all the outside sights and sounds and seemed quite interested in the ducks! In the 20 minutes we were out he only bit his harness 5 times and there was no prolonged chewing - just a quick reposition each time. I think he made a fantastic start and all we want now is some fine weather so we can continue to get him used to it.

I had forgotten to update this but Ollie's Blood results came back Negative which was brilliant news and his DNA result came back as a Male so on this occassion our beliefs were absolutely correct!

As you may know, Ollie shares half of a double cage with Joza; the other half being occupied by Kenny & Sydney. Kenny & Sydney eat a pelleted Diet but Ollie & Joza eat seed. In the future we are thinking we might remove the partition and allow all 4 birds to be together but before we do this we would need to get them all eating the same. I firmly believe a pelleted diet to be the best as it offers much less fat than a seed diet. We have done extensive research to balance out cost v benefits and what we are using is a pellet that is nutritionally similar to Harrisons but cheaper to buy. We started by offering this to Ollie and Joza in the evening after their day of fruit & Veg. In the morning, before I give them their fruit and veg I put a bowl of seed in for half an hour so they could top up on this. After 2 mornings I forgot to do this and noticed they were eating the pellets! Job Done! They haven't had a bowl of seed since! I have to say that they do have a couple of Hazlenuts and/or half a walnut each in addition as nuts do hold some benefit for them nutritionally but they avoid stuffing themselves with very fatty sunflower seeds. This was a very quick and easy transformation from seed to pellets and I consider us very fortunate that it happened so quickly and smoothly.
As for putting all 4 together? Well Joza is a bit timid with Sydney at the moment. I am working on this when they are all out in the mornings and I sometimes get just Joza & Sydney out in the lounge in the evenings. They do both sit on the Java tree together - well not literally together but on the same tree! I think we have a way to go yet but time will tell if this ever becomes possible. If I don't think they will get on, it wont happen. Kenny & Ollie are both pretty laidback but the 2 blue-fronts are a bit feisty!