I have been asked by Birdline to safehouse a Mealy Amazon. Unfortunately, I am not allowed to name her at the moment (Stop Press!!! - She is called Dolly). Some pics are below. She is an absolute darling. She is supposed not to like women but has been OK with both Gill & Stacey though we will need to see if she is still OK when she gains her confidence. In the meantime we are rewarding/praising her for interacting with them. She is approximately 9 years old and I collected her on Friday 18th November 2011. As Birdline don't issue a rehoming list before Christmas, I am expecting her to stay until early February at the earliest. 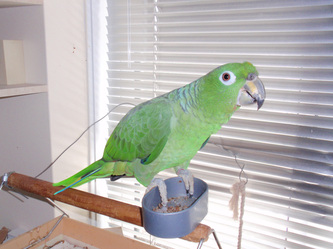 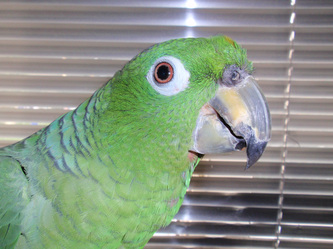 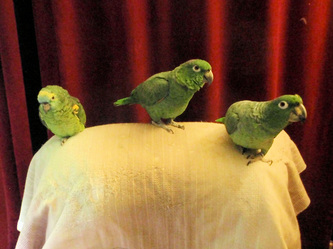 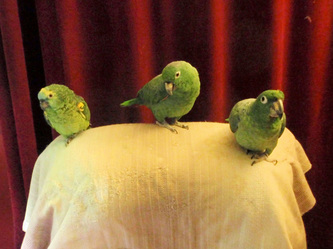 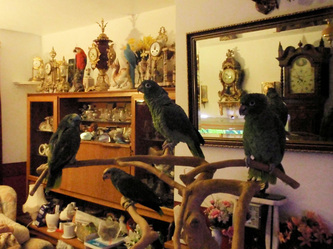 On 30 November 2011, we introduced Dolly to the other Amazons. Obviously it was a bit strange for her at first as she has never known other birds before but she reacted and responded well. There was one worrying moment when one took off, spooked the others and we had five Amazons all flying around the room together but they soon settled again. All in all, a promising start to her socialising!

On 8/12/11 I submitted a request to permanently foster this bird. She has settled in so well with all the other Ammies and is a real darling with them. After her eating problems when she first came I do not want to put her through that again so hopefully, the rehoming team will allow me to keep her permanently. I am hopeful that she will share Ollie's cage. I am saying she but we don't know for sure. Knowing my luck she will turn out to be male. Once it is agreed I can keep her, we will get her sexed and find out! So, it's fingers crossed here!!!

Dolly is here to stay!!!

Just before Christmas I had confirmation from Birdline that I can foster Dolly permanently so she is now a member of my flock (although she will always be owned by Birdline). She has moved into Ollie's cage and settled well although we couldn't persuade her to eat Pellets but we did know she tended to stop eating when stressed so didn't try too hard. Currently both Pellets and Seed are offered to Ollie & Dolly. It was a wonderful Christmas Present and we were all so pleased with the decision as were Dolly's previous owners who still keep in touch and follow her progress. She still comes out every night with the other 5 Amazons (we now have another one!) and socialises well. She really is an absolute darling! In the New Year we will get her sexed to check she is really a she and not a he - watch this space!!! 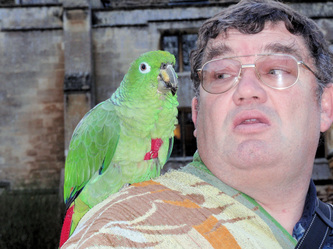 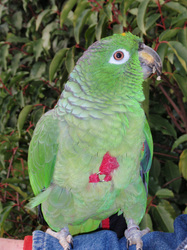 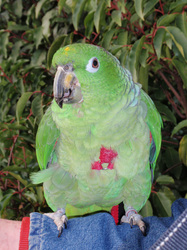 Dolly comes out to Lacock

On 7/1/2012 we decided to try Dolly on a harness and, if succesful, take her to Lacock Abbey. She was absolutely great and accepted the harness straight away. All the time we were out she was as good as gold and never went to bite the harness once - in fact it was just as if she didn't have it on at all! She flew once but that could have been because she slipped. The rest of the time she was more than happy to sit on my hand, arm or shoulder. Apart from Kenny, I think she is the best behaved of all the Ammies on a harness, although Ollie (my other Mealy Amazon) is pretty good too - perhaps it's a Mealy thing?!!! I can see many more trips out for Dolly this year!
We also sent off her DNA sexing sample so, watch this space!

Dolly is, indeed, a FEMALE!

On 14/1 we had Dolly's sexing test results and she is, indeed, a female. This is unusual for us as they usually come back the opposite to what we thought but the last few have been right so perhaps we're getting better at predicting!
Dolly moves on.
Ollie and Dolly were very active birds and they really needed an aviary. As Dolly was a Birdline owned bird and they had become a bonded pair we approached Birdline to find an aviary home for them. After many months of searching, Birdline finally found an aviary for them (along with two other Mealy Amazons also needing an aviary). All four birds were moved in September 2018 and instantly got on fine and enjoyed the extra space. We still get regular reports and all four birds are happy together. This really was the best result possible for Ollie & Dolly.