We’re all going on a summer holiday 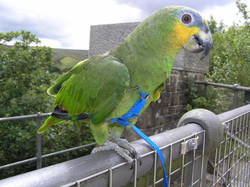 We’re all going on a summer holiday,

No more home life for a week or two.

We’re all going on a summer holiday

And, yes, the owners come too-oo-oo!

For several years now we have been holidaying with one or both of our parrots – an Orange winged Amazon named Kenny and a Medium Sulphur Crested Cockatoo named Coco. We are caravanners and therefore we have no problems with a parrot in the accommodation as it is our own accommodation!

How did this start? Well about 15 years ago I owned a Blue-fronted Amazon but it became evident that he was left alone for too long in each working day so we had to sell him. I have dearly missed this bird ever since and when I was forced to take Medical Retirement we bought Kenny. It was shortly before we were going off to France for 2 weeks so I asked the previous owner to hold on to him until we returned so as not to stress him too much. We returned in mid June and I went to collect him. Although he was different to the previous parrot, he was still very special and instantly filled the great hole in my life that was created when we sold the old one. I was truly happy. Being retired, I was able to take my 2 teenagers away in the caravan for the school holidays and the long summer holidays were approaching. We weren’t sure what to do with Kenny for the 6 weeks we were to be away so I decided there was no reason why he shouldn’t come with us. When I bought him he was in a cage which I felt was too small for him but I kept it to reduce his stress on coming to be with us. After a few weeks I bought him a larger cage which he took to instantly. The only problem was the new cage was too large to take caravanning. The old cage however, would just fit through the door. The solution was obvious. Would Kenny accept his old cage again? He did – instantly. So, a quick wing-clip (just in case!) and he was ready to come away with us. His new routine involved waking at about 9:00 and once the morning ablutions had been completed we had breakfast in the awning with Kenny allowed the freedom. Part of his home routine was sharing breakfast with us so there was no reason why this should not continue. His share of our breakfast consisted of toast and sunflower spread with Orange Marmalade, liberally dipped in his own seed mix!!! While my 2 well trained teenagers washed up and made the packed lunches, Kenny and I went for our morning walk. I am partially disabled so it was only a short walk but took about an hour. Then it was back for some more freedom of the awning and lunch. Parrots are “social eaters” and generally eat when we eat. Kenny is no exception but I don’t understand why our salad and fruit tastes better than his salad and fruit! After about 3 weeks, Kenny alarmed me by showing me just how far he could fly with clipped wings! This taught me a valuable lesson and whilst we still kept to pretty much the same routine, a little more care was taken over our newly discovered escapee!

Before our October holiday, we bought him a harness. If you ever buy one for your bird, DO NOT try to adjust it while he is wearing it. It is far too stressful for him. After a few “fittings” we had the size right. Does he like it? Well he makes a token protest as you put it over his head but then allows you to fasten it and doesn’t try to chew it all day. This gives him much more freedom and I think he is grateful for this. Nowadays on holiday, we have a “converted” baby seat in the car fitted with a perch and he sits on this in the car perfectly happily. Now we are often seen walking through parks, along Sea Fronts, along rivers and canals, always with a parrot with us!  Nowadays, the only place we can be seen without a bird is in a Supermarket. Whilst there are no signs saying “No Parrots” we feel that Kenny would not be very welcome! Pub lunches are achieved in the Garden where he is happy to pad around the table and nibble ours! One thing we have noticed though is that he has learnt the car perch needs 2 feet to hold on (I have learned to drive much more smoothly but he still needs both feet to hold on!). Even when we are stopped or have removed his seat/perch for a picnic and it is safely on terra firma, he still holds on with both feet, refusing to hold food in one foot, à la parrot!

What came next? Well more of the same really. We recently acquired a Cockatoo (and we all know how Cockatoos crave attention), so he now also joins us. Being more fond of close contact, Coco is happier in a harness. He is as good as gold when putting it on him and I have a suitably converted old Terylene Nappy over my shoulder to catch his “deposits”! Coco definitely prefers the all round visibility from the shoulder whereas Kenny feels happiest sat on my finger.

What do other people think? In all of our many expeditions we must have encountered just about every reaction possible. Some people just walk past in a typically “British” fashion and say nothing, but we often hear them say to themselves, “did you see that parrot?” Some people just express great surprise as they pass us whilst some are keen to stop and talk. One of the funniest experiences is when someone is passing, clearly not intending to speak, and the bird says, “Hello” to them. However else they react, people are always pleased to see the bird(s) out of the cage, enjoying the sights and sounds of being out, yet still safely “attached” to me (by way of their harness). From time to time, someone passing by will make a sarcastic comment about Bird Flu and, yes, I am concerned about Avian Influenza. However it is mainly transmitted by bodily fluids and/or excretia so I just no longer put the birds down on a tree, fence or gate without first examining it. If I was planning to visit an area defined by DEFRA as being affected, we would have to leave the birds at home but, fortunately, we have not been in that situation.