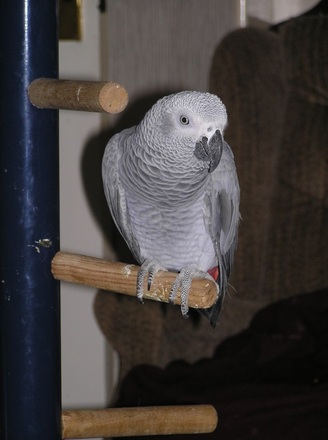 Next came an African Grey who we called Suki (dob:- 1/7/2005). She was subsequently sexed as a female (at least the name was appropriate!). She was a hand reared baby and we had great fun training her. However because I was at home and the rest of the family were out all day it was agreed that I would have less to do with Suki to give her a chance to bond with the rest of the family. Unfortunately Suki took offence at my seemingly ignoring her and now hates me with a passion! She relates very well to my wife and daughter but hates me and my son! That disproves the theory that they favour humans of the opposite sex to themselves. Suki has become an excellent talker but doesn’t learn the things we try to teach her – instead she picks up what she wants to learn. She regularly imitates the phone ringing, follows it with Hello; Yeah; yeah; yeah; Bye then! Also I would come down to dinner and call to my wife, “What’s for pudding?”. Suki now does this for me!!! She says Hello to most of the parrots by name and regularly calls the cats. When Adam was small, Suki used to call "Adam" but in Gill's voice! Adam used to come running to the Dining Room and got quite upset when his Mum wasn't there!!!