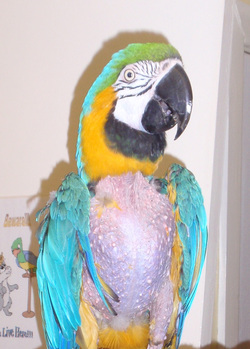 Phoebe is an 11 year old Blue & Gold Macaw (dob 1/9/2000). As you can see she has a problem! The lady of her previous house fell ill about 18 months ago and couldn't spend the time with Phoebe that she always had. Phoebe reacted in a way that is not unusual for companion parrots and started mutilating her own feathers. The result can be seen in her picture. She is a lovely natured bird and in the 24 hours we have had her home she has spent most of it with me. She just loves company. At the moment her cage is in the lounge but in a week or so she will be in the Bird Room (aka Dining Room) with all the others except Coco (who lives in Stacey's room). She has a few yellow quills on her chest and we hope that with time spent with me, the change of environment, and the company of 8 other birds, she will overcome her feather plucking habit. We didn't pay very much for her as it was a rescue situation and if she continues to pluck we will still love her as she is such a charming and loveable bird but IF we can stop her plucking and she allows herself to grew fully feathered it will be such a rewarding experience for all of us (Phoebe included). We plan to buy her a new bigger cage and she will move into the Bird Room and her new cage at the same time. Watch this space! 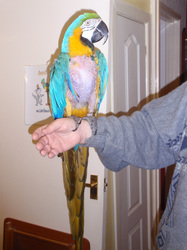 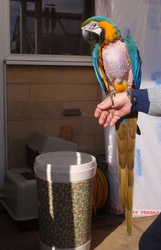 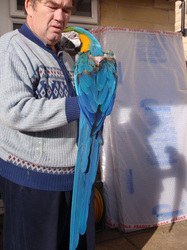 Phoebe meets the others!

Today, 8/8/2011, Phoebe was introduced to some of the others. She was sooooo good! Never a lunge and apart from Max, no beaks either! With Max they did twist beaks together at first but very soon settled down to being good (albeit at opposite ends of the perch) - a good sign of Phoebe's peaceful nature. 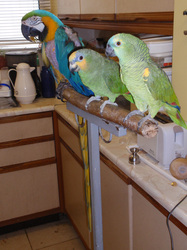 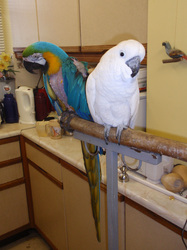 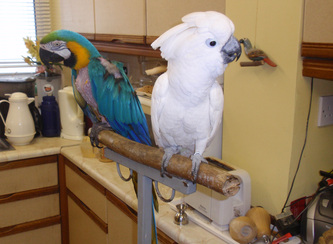 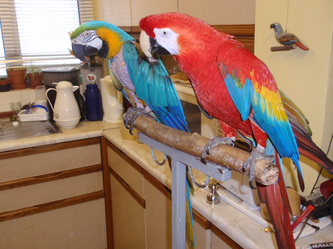 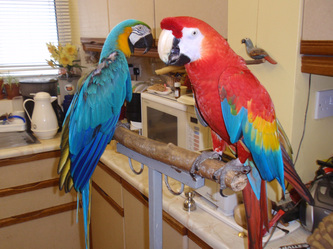 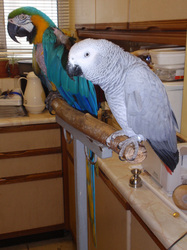 Today, 15/2/11, Phoebe has managed to retain her yellow quills which are developing into feathers, on her chest but does seem to have lost the downy feather quills however, and we are very excited by this, she has some distinct blue feathers on her back. On the cards is a blood test along with microchipping and, whilst under the anaesthetic, we plan to have her fitted with a collar to stop her reaching all but her leg feathers. We believe this is just a bad habit and being unable to reach to chew her feathers might just break the habit. If we can get her fully feathered by June we might take her to the south of France in the summer but it is no good taking her like she is now as she will get badly sun-burnt! At the moment we are all feeling quite positive about Phoebe - long may it last!

This section shows the progress Phoebe makes with her feather plucking habit. At the moment we have a picture of "before" and 2 pictures of "during". Look out for more during and, eventually, an after as we track her progress here. Watch this space!!!

Well on Saturday 28th May 2011 it was time to remove Phoebe's collar. It hasn't all been a complete waste of time as she has grown a bunch of new feathers on her lower back but her feather covering is by no means complete! You see, prolonged feather plucking has damaged the follicles and it is now exceptionally unlikely that she will grow a full covering of feathers again. Still, she is a lovely natured bird and we all love her just as much "undressed" as "dressed"!!! In the pictures in the second row below you can see her without her collar showing just 6 or 7 small breast feathers in the left pic and proudly showing off her new bunch of back feathers on her lower back, in the middle pic. The last pic shows her in her multi-purpose vest:- (1) to kep her warm when it's cold; (2) to stop her getting sunburnt when its hot; and (3) to provide a physical barrier between her beak and her breast but  this only works with her harness as she tears it off the rest of the time. I think Phoebe has suffered enough indignation and so we leave it off unless she goes out! Well, you dress up to go out so why shouldn't she!!! 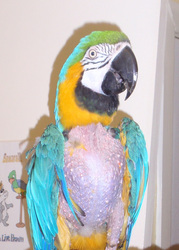 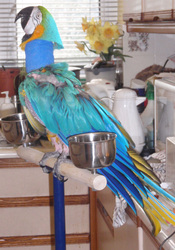 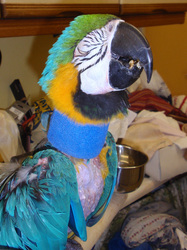 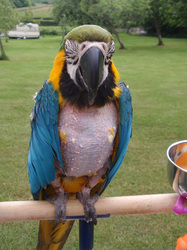 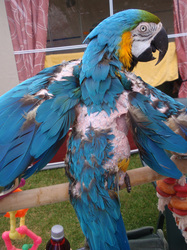 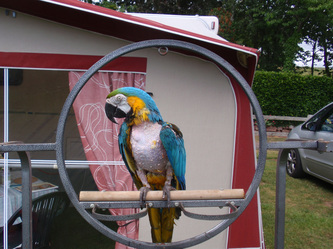 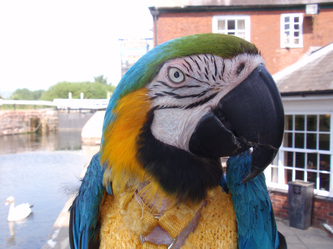 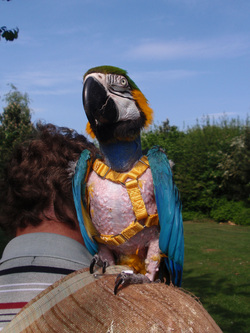 Phoebe shows off her new harness on her first outing.
Today,  04/05/2011, Phoebe took her first outing in her new harness. It is a yellow harness to remind her what her front should look like! She had two problems initially:-
We saw quite a few people, several dogs and even some Ducks. A group of door to door salesmen were very taken with her!

All in all her first outing was a great success. Let it be the first of many!!! 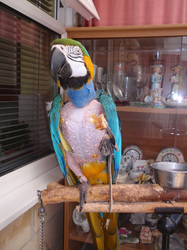 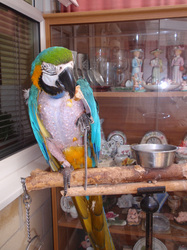 Today, 24/05/11, Gill and I took Phoebe and Billie to Lacock. It was a sort of dry run for Phoebe's new vest and all went superbly well. She didn't try to pick at it all, bless her! The pictures are below. Note how the colours match her own with a yellow front and a blue back, just the same as the Blue & Gold Macaw colours. 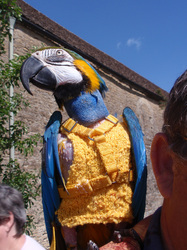 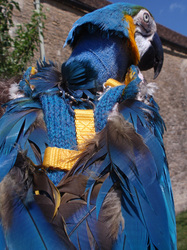 Phoebe goes to the Vet

On 11/1/2012 we had to take Phoebe to Neil Forbes, the Avian Vet. She had what we thought was a Feather Cyst on her left leg but we wanted it checked out. Neil confirmed it was a Feather Cyst and lanced it for us. It didn't seem to be causing Phoebe any trouble - it was worrying us much more than it was her, but it was better looked at. The cyst has now virtually disappeared and it must be more comfortable for Phoebe.