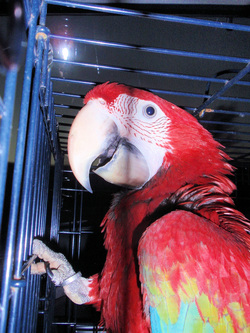 This is Georgie, the Green Wing Macaw. Supposed to be second only in size to the mighty Hyacinth Macaw yet known as the Gentle Giant. She has been DNA sexed as a female. Her egg was laid on the 1st or 2nd August 2011 and she hatched on 28th August 2011 making her just 22 weeks old when she came to us. Yet in her short lifesapan we are her 3rd home! There was her first home where she was hatched in an incubator as her parents had a track record for playing football with their eggs and breaking them. She was then hand reared and at 20 weeks was sold to Trix in Ashton-under-Lyne. Trix bought her as company for her beloved Blue & Gold Macaw, Ringo but Ringo hated Georgie. In reality, he probably hated the thought of having to share Trix and saw Georgie as a threat. Anyway, Trix soon realised it was not going to work out and we came along. She is settling in very well and is sat on my shoulder as I update her web page. Georgie loves everyone and everything - she is truly a Gentle Giant; but the other birds are a bit wary of her. She is next to Phoebe in the bird room and I put them together on the Java Tree the other evening and they had a brief spat and then settled down at opposite ends! I hope they will become best friends. She is learning the "Up" command well and is experiencing a wide variety of new foods - most of which she prefers mashed! She is a good Fruit eater and also eats both seed and pellets though she makes a mess with her seed (but then again, don't most parrots!!!). As soon as she has learned the Up command properly, we plan to harness train her while she is still a baby so she can come out with us in the Summer. Hopefully by then she will be better friends with Phoebe as they could sit one on each shoulder! 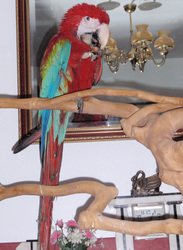 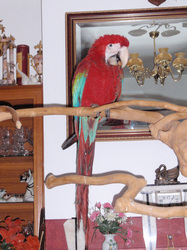 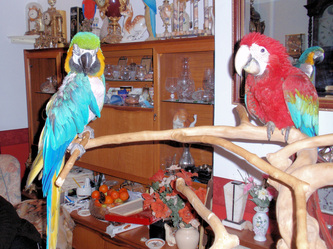 Georgie and her new harness 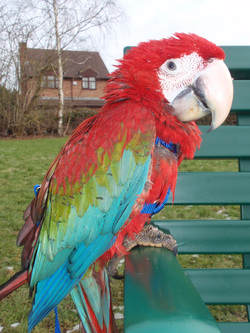 16th February 2012 - Georgie has really taken to her harness very well and very quickly. Here are a few pictures of her showing it off on a recent walk with Stacey while I was on holiday. It is obviously better to start harness training when the bird is as young as possible and this has been proved by Georgie. I am sure she will have many outside walks in the future! 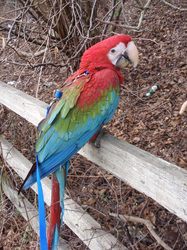 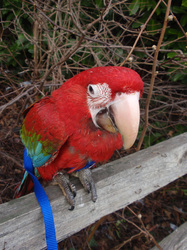 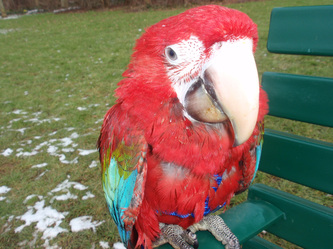