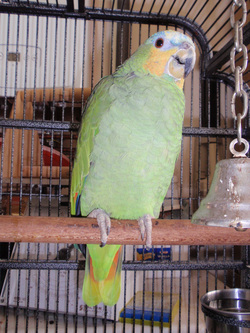 Bobby
Bobby is friends with Bobbie (or rather their previous owners are best friends!). It was through Joyce (Bobbie's previous owner), and Facebook, that I came to meet Brenda. Brenda had what she had been sold as a Blue-fronted Amazon but when I turned up, Bobby was an Orange Winged Amazon. Unfortunately a lot of breeders sell OW as BF as BFs command a higher price and to the inexperienced eye, there is little difference but, an experienced person will know that a Blue Fronted Amazon is the only Amazon you are likely to come across with a totally black beak. Yes, they can still have blue across the top of their nares and we all know even with BFs the amount of blue varies considerably (Bobbie has very little blue yet Joza has a lot of blue) so you can easily understand how Brenda was taken in. Still Bobby is definitely an Orane Wing! He really only relates to Brenda's husband who, unfortunately, is away a lot so Bobby wasn't getting the attention he deserved, hence he is now with me. Adam and I made the long trip to Middlesborough on Tuesday and Wednesday (staying overnight) and we collected Bobby on 11th July. Bobby is thought to be just over 10 years old so I am going to assume a date of birth of 11/07/2001.

Bobby has to settle in. He is not used to other birds and he is in a room with 2 others. He was recently chased off when he strayed onto the cage of a Safehouse African Grey! He got a little nip on his foot which fortunately has already healed and, hopefully, he has learned a valuable lesson as he just loves to be out and to sit on top of his open cage all day long! He is a good eater and, I'm sure, once settled in, he will demonstrate this. Bobby doesn't talk so we might change his name to Robby just to facilitate referring to the birds around the house as we already have Bobbie (with an ie). First we plan to get a sex test done and see if he really is a boy! If he comes back as a girl, she will be called Poppy (which ironically was Bobbie's name when he first came to us as he was believed to be a girl!).

So, a very warm welcome to Bobby/Robby/Poppy! Bobby does not talk at all and isn't particularly cuddly but does like to be stroked just when he is ready and no-when else! In view of the un-cuddlyness of Bobby I don't know if we will ever manage to get him into a harness (being cuddly certainly helps!) but perhaps next year when (and if!) Summer comes, we'll try. Who knows?  Welcome Bobby!