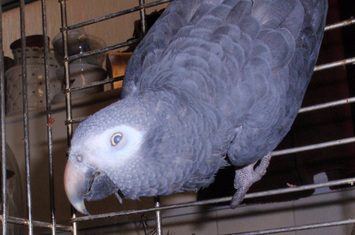 Charlie is a Timneh African Grey aged 17 years. Her owner died aged 103 and she had owned Charlie since a few weeks old. Because of the age and lack of mobility of her owner, Charlie has never been out of her cage. Charlie has demonstrated her femininity in the past by laying eggs. She is quite petite and has bad cataracts in both eyes so is nearly blind. If you look closely in the picture below, you can see the cloudiness in her left eye - the right is the same. However, she is a real cutie and just loves to be tickled when you talk to her. Because she can't see very well it is important to talk to her as you do anything near her cage or she will get startled. It is possible to get the cataracts treated at a cost of £1500 but it is a very serious operation which even the specialised Avian Vet was not keen to do. While she is coping with them it is best to leave her alone. With a blind or nearly blind bird there are some obvious things to bear in mind like:- Not changing her cage around too much, keeping her food, fruit and water bowls in exactly the same place each day, talk to her as you go near her cage; and she rewards you with lots of love and affection. She loves to be tickled through the bars and has taken this from all of us very quickly. She gets startled by hands as she cannot see them approaching and when you touch her to step up she suddenly feels hands and gets startled. She really needs an owner who is around all day and can spend loads of time with her getting her used to those alien things we call hands! She is happy with fingers so is pert way there already. This bird has so much love to give and will be a real cutie in the right forever home. 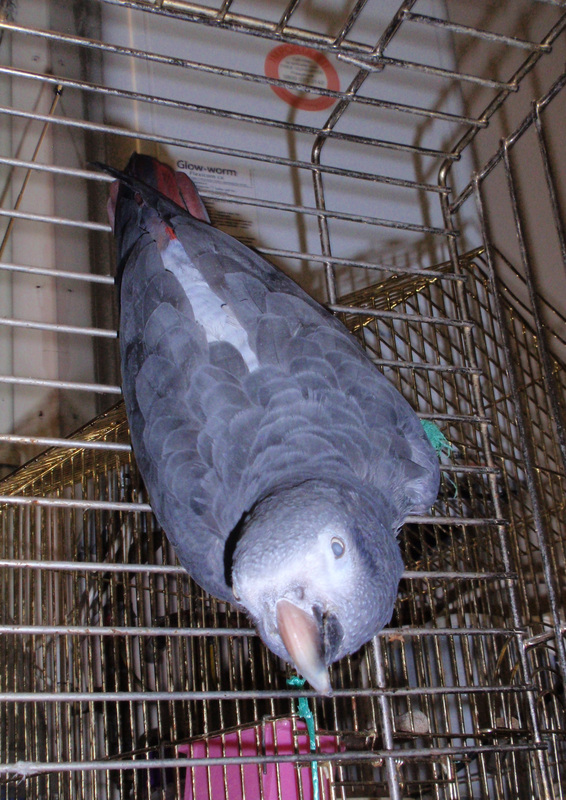 Charlie is going to see an Avian Vet.

Having spoken to Sheila, she has advised me that Birdline are prepared to pay for Charlie to be seen by an Avian Vet in the Torbay area to establish that this is just Cataracts (in which case no further action should be taken as it is too risky) or a possible inner (behind the) eye infection presenting like cataracts. Sheila had an Amazon who had an infection that presented like cataracts, once before that was cured. Hopefully she'll be taken by me, down to Torbay to see the vet during w/c 30/1/12. Watch this space!!!

Charlie's Avian Vet results and where we go from here.

It is definitely degenerative cataracts in both eyes. There is also a bit of infection which is being treated with Metacam. Sheila has advised that she will discuss the possibility of surgery to replace the cloudy lenses, with the Directors. I am waiting the result. 22/02/2012

On 13/07/2012 Charlie is moving to Devon. Fed up with all our rain and hail, she is off in search of Sunshine and Kenny said Devon was the place to find it! No seriously, she is going down to Devon to be closer to the specialist Avian Vet she comes under. We will miss Charlie - she has been here for 7 months now. We are sending her off with the bell that we bought her and the hanging rattle - both of which she loves! Good Luck Charlie.