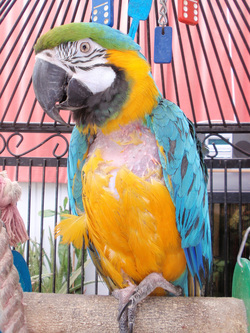 Charlie - Blue & Gold Macaw
Charlie joined the family on 16/04/2012. His dob is assumed as 01/09/1997 - 3 years older than Phoebe (the month and year are correct; we don't know the day). We had seen him some 4 weeks earlier and agreed to take him but because Stacey & I were away for 10 days and then Gill & I were away for 2 weeks, we decided it would not be fair on him to bring him into our family with so much upheaval. He has already been rescued once in his life from a situation where , we believe, he was being physically abused. He had settled down well into his new home but when his owner had to go back to working days he was left alone all day and started to pluck his feathers (see pic). He has settled in really well with us and is already learning how to step up. Phoebe and Georgie have taken to him quite well and the three of them are often out together. He came with his own big cage but it is old and a bit rusty in places so we have just replaced it. The new (second-hand) one is awaiting sterilisation and steam cleaning before Charlie transfers to it. His cage lives in the Conservatory but in the Winter when the conservatory gets a bit cold, he will come into the lounge extension (when it is built!). Charlie is an exceptionally good eater and will eat more or less anything you put in front of him but his favourites are:- Peanut Butter on toast/cracker, boiled potato, apple, orange and sweetcorn.
How did he choose us? Well Stacey saw an ad in the other vet practice in Chippenham for a B&G needing a new home. I, of course, couldn't resist so we approached the nurse who had placed the ad; spoke with her; sent her details of the website and she chose us. It was her Uncle's bird but they were very happy with us and we are very happy with Charlie. 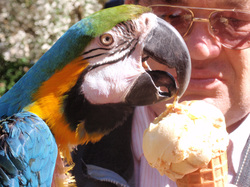 For once, we had it right! Charlie came to us as a male and we have just had (27/06/2012) the results of his DNA Sex Test and he is, indeed, a Male! It's nice to have a Male Macaw as my other 3 are female and to disprove all the thoughts that Male birds are attracted to females; Charlie is very much bonded to me, a male!

At the week-end he had his first outing, to Lacock. He was as good as gold only going for his restraint a few times and stopping when told to. He was out for about 3 hours. The picture left shows him enjoying a treat. I know Ice Cream isn't particularly good for parrots as they cannot digest the lactose but a little bit did him no harm and, as it was Gill's Ice Cream, a little bit was all he was allowed!!!

There are some more pictures below of Charlie at Lacock Abbey. 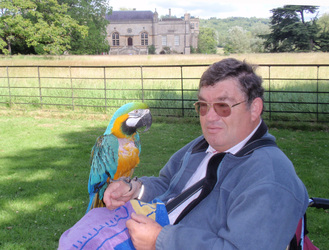 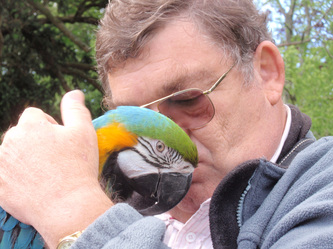 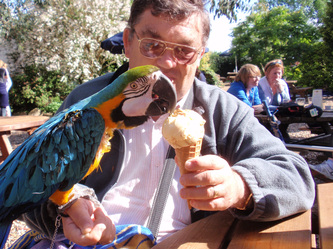 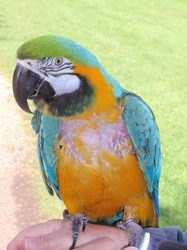 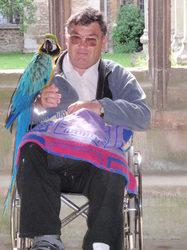 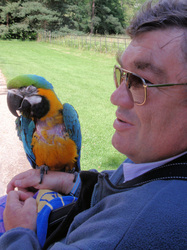