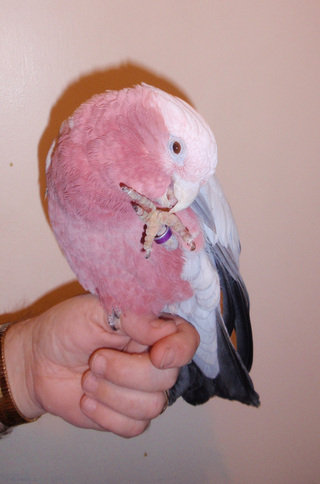 Ruby
The latest addition to our flock is Ruby. Ruby came to us on 10th Februrary 2013 and is 4 years old so, as we don't know her date of hatching it will be assumed to be 10th February 2009. She is a Hand-reared Galah and was sold to her only owner ny Porton Down Pet Centre. Her owner sadly died and she was taken on by his daughter but she realised she didn't have the time for Ruby so on 10th February Stacey and I went to Shaftesbury to meet her. I have to say it was Love at first sight for both me and for Ruby. She took to both me and Stacey straight away and started displaying to us - always a positive sign. I was smitten and Stacey knew there was no way we were leaving without her. She has been DNA sexed as a female by the breeder before being named. She is a typically cudly Cockatoo and, as yet, has been remarkably quiet. Unusually, she doesn't seem to hold food in her foot. She takes seeds out of her food bowl and puts them on the frame of her cage to crack them. She will happily nibble on Apple and Biscuits if we hold them but give them to her to hold and she will just drop them. She came as a non fruit eater but since we have been putting it on a fruit skewer she has been nibbling away at it so hopefully we will develop her taste for it. She does fly but always comes back to me. She is an ideal candidate for harness training as she adores being caressed all over her body. Below are some more early pictures of Ruby. 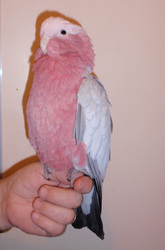 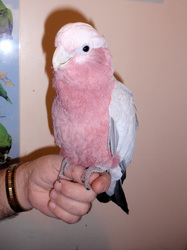 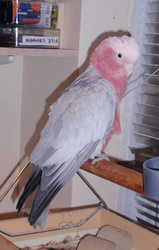 Today, Monday 18th Feb 2013, we harnessed Ruby and took her out for the very first time. Unfortunately she has recently had a pedicure so couldn't grip too well and I, who was expecting to have Blu, had my poop-proof cape on which Ruby couldn't grip on. Once I had tajken it off she was much better. On the whole she was very good once we discovered how she needed to stand. She wasn't too keen on Blu, who accompanied us - but he is huge by comparison!, but she ignored him most of the time. She wasn't prepared to stand next to him on the fence mind! On the whole a succesful first outing but a few more are needed to really get her comfortable on the harness. Today was just a short half hour trip.

After the outing came another new experience for Ruby - a shower using the adult shower in the bath. She was an angel! She was as good as gold in the shower with absolutely no signs of trying or wanting to escape. She was in there for a good 3 or 4 minutes as her feathers are very waterproof but she was very dusty. The first of many showers for this young lady methinks! 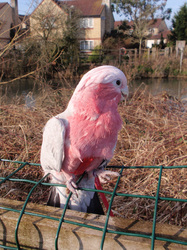 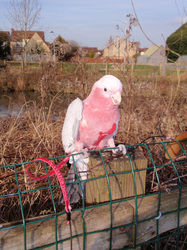 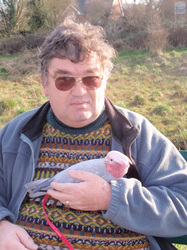 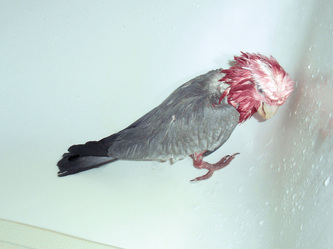 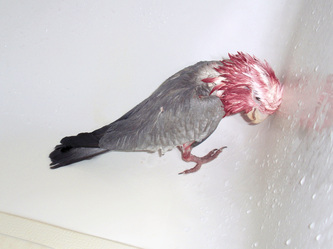 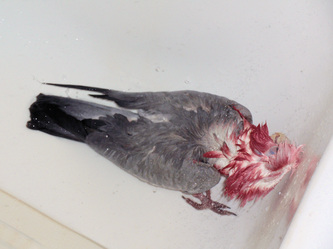