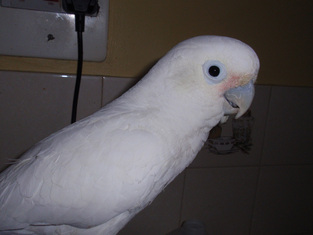 Today, 2/5/2011, we adopted Jasper, a beautiful Goffins Cockatoo. We are guessing he is about 6 years old and we will assume his birthdate to be 02/05/2005* so that he actually has a birthday celebration! We adopted Jasper from a lovely lady called Pam who's primary interest is Ferrets. She has had Jasper for about 8 months and has worked wonders with him! Jasper entered life as a hand reared baby and was bought by an owner who, we assume, loved him. Unfortunately after about 2 years his owner died and Jasper was passed to a family member. So far so good, you might say! Well unfortunately this person suffered from OCD and couldn't stand the mess. Jasper was confined to a dark garage and fed budgie seed and a little sunflower seed for 4 years!!! (Yes - I was almost crying for him too!). Well Pam took him on and has worked wonders. He was supposed to be a vicious bird but is such a loving bird now you almost can't believe the transformation. He rarely steps up on command but we will work on that but he loves cuddles as all Cockatoos do and he will fly to your shoulder (or head!) on demand. He is harness trained but he can undo (very easily) the catches on the Feather Tether harnesses. We plan to modify his existing harness and/or try the Aviator Harness to avoid him escaping. He is currently here with our flock on trial with the very willing agreement of Pam to have him back if he doesn't take to the other birds. He is now in his cage (the one he came in so it is familiar to him) in the Dining Room (aka Bird Room!) getting used to the other birds. I showed him around the others while they were all in their cages and he showed no fear with the 2 Amazons nor the 2 African Greys but did tense up a bit with the Scarlet Macaw and the Umbrella Cockatoo, both of which are bigger than him. Surprisingly he didn't flinch with Phoebe the Blue & Gold Macaw although she is much bigger. I can't help wondering if birds recognise other birds who have a gentle nature! It certainly makes you wonder. After just 2 hours in his new environment he appears very comfortable and is eating well - always a good sign! Watch this space for details on Jasper's future.
* Following an e-mail from The Parrot Society we have learned that Jasper was first rung in 2000 making him 11 years old. We will treat his birthday as being 02/05/2000. 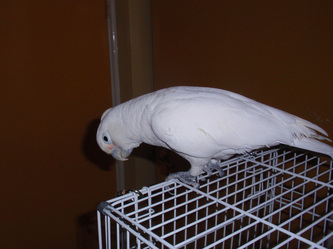 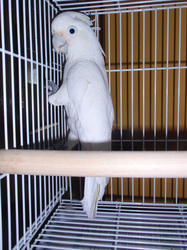 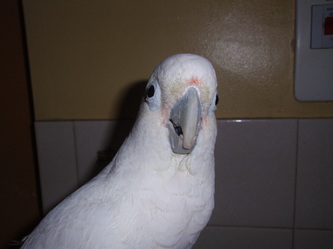 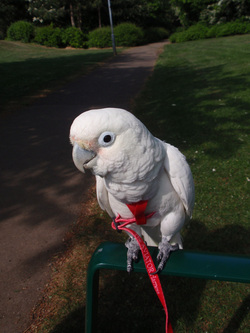 Jasper shows off his new Aviator harness!!!
Jasper has proved a little devil with his harness. He manages to undo the clips incredibly quickly! This was obviously dangerous taking him out as his wings are not clipped. So we borrowed an Aviator Harness. Not keen on these I was a bit apprehensive but Jasper was fine having it put over his head and again fine having his wings threaded through and once fastened he could not undo it (Parrents 1 : Jasper 0)!!! This afternoon, 04/05/2011, Jasper had his first real outing outdoors. He came with Phoebe, Dad and Stacey and was as good as gold. We saw quite a few people, several dogs and even some Ducks! A group of door to door salesmen stopped to admire us birds and one said he used to know of a small Cockatoo like Jasper who had been abused and plucked his feathers. I was able to show him what a Goffins Cockatoo should look like! The outing was a great sucess - let's hope it is the first of many!

On 31 January 2012 we took the heart-wrenching decision to stop fostering Jasper. We had tried for many months to get him settled but there were too many birds for Jasper - he was used to being a lone bird for pretty much all of his life. Jasper went back to Pam, where he came from having had many exciting outings with us on his harness where, as a lone bird, he was very good and enjoyed himself immensely. Hopefully Pam will be able to find a new set of foster parents who will keep Jasper as a lone bird. We wish Jasper well as he tries to find a new forever home.