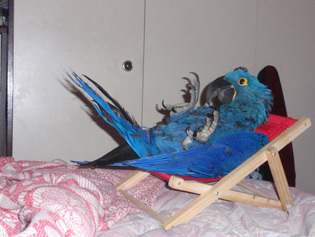 In December 2012 we bought Blu. It had been my life long ambition to own a Hyacinth for many years and, at long last, I have achieved it! Blu's introduction was traumatic to say the least. We took him to Neil Forbes for a health check. Everything came back fine except the Psittacosis test which showed higher than usual amount of antibodies. This meant a course of 6 weekly injections into the breast muscle. The injections are supposed to be very painful but Blu was brilliant. Neil couldn't believe how placid he was. The only problem was, we think because he associated going in the travel cage with a painful injection, he was very sick (vomiting) in the car on all journeys but the first. Then we had another scare. Someone on the internet knew someone, who knew someone who had bought a Hyacinth from a breeder in Pembrokeshire a few years ago and that bird died from PDD (Proventricular Dilation Disease). As our Blu came from a breeder in Pembrokeshire we decided to have him tested. Unfortunately, the test was delayed by Christmas and we had a very worrying Christmas and New Year but in early January 2013 the results came back negative. That meant the end of Blu's quarantine and he could be put down in the Bird Room with all the other birds where he was sooooo much happier!

Another problem he had was that in the breeders conservatory, where he used to live, he befriended a Blue & Gold Macaw who, unfortunately bit off all his tail feathers. This made it very difficult for Blu to balance so we took him back to Neil Forbes, armed with a collection of Macaw tail feathers from Hyacinth, B&Gs, GW and a Scarlet Macaw, for Neil to "imp" some new tail feathers onto his stumps. You can see a before and after in the pictures below. You can also see that Blu now sports a very attractive multi-coloured tail! (Perhaps we should have called him Rainbow?!!). 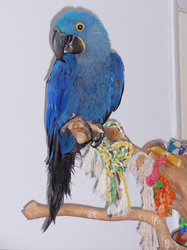 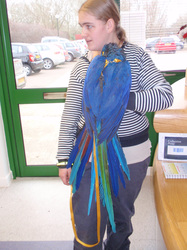 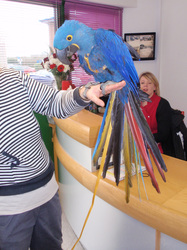 Blu meets the others

Blu seems to be settling in well with the others. He seems to think because he is bigger, that he should be boss but several of the other Macaws have other ideas but they only squabble like kids and don't fight. They are getting more and more used to each other and a lot of the time they seem very happy with each other. Below are some more pictures featuring Blu. 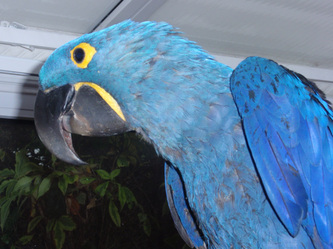 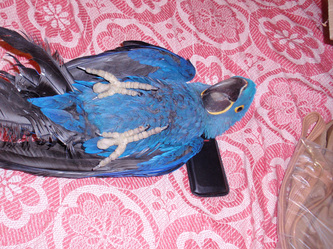 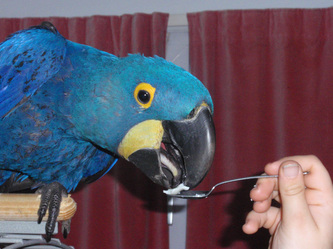 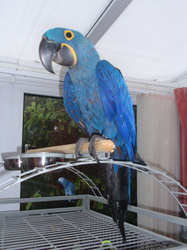 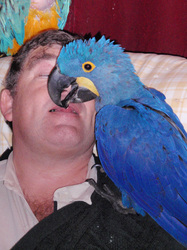 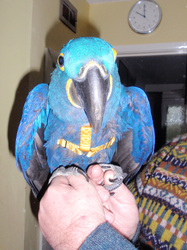 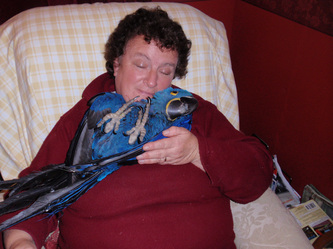 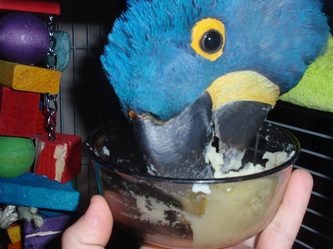 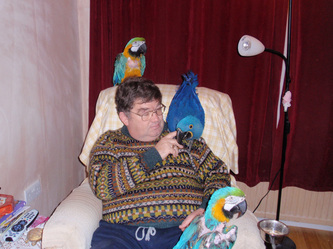 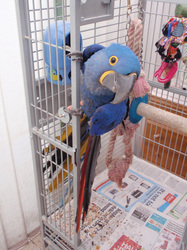 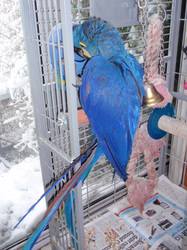 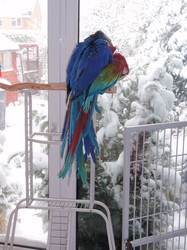 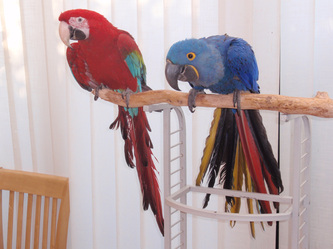 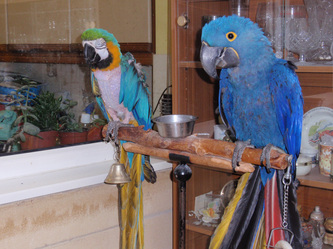 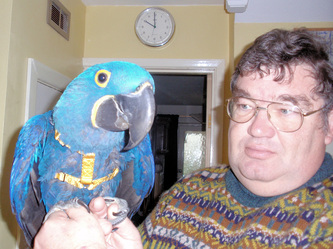 Today, Monday 18 Feb 2013 we took Blu out for a short walk to get him used to going out. We only walked up to Derriads Pond but it was a worthwhile experience. He was a bit panicky (not at all bitey) when we put on the harness so we have some work to do here but the fact that he wasn't at all bitey is a promising sign. Because Gill was with me, he followed his usual trait of preferring her and insisted on sitting on her (so I took control of Ruby who also came with us). On the whole it was a very succesful first outing - the first of many!

When we returned it was time for another new experience - a shower in the bath, using the adult shower. Blu was surprisingly well behaved and although we got splashed a little, we stayed considerably drier than we expected! 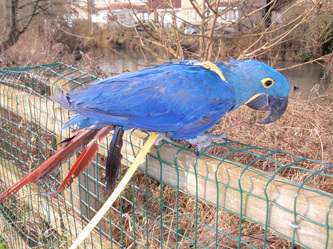 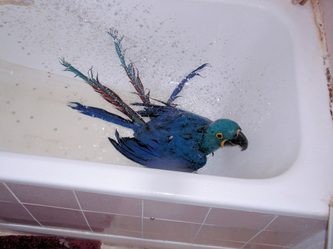