To clip, or not to clip; that is the question! 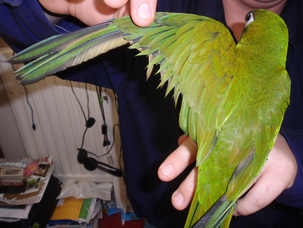 Oscar, clipped. Note: 2 outermost feathers remain, 5 cut feathers.
There has been a lot written about whether or not to clip a parrot’s wings. There are about as many different stories as there are parrots, so no-one can blame you being confused. I am about to give you my preferred view on the subject.

Firstly, Baby parrots. Babies need to learn to fly. They are not born with this skill. Having a parrot that can’t fly is like having a son or daughter who live their whole life not being able to walk – you wouldn’t wish that on anyone! So, why wish it on your parrots? In learning to fly, parrots build up strength in their breast muscles that they need to fly and it is important that they are given the chance to do this. My Max was clipped at outset (not by me I hasten to add). When we collected him as a hand-reared baby he was already clipped and was unable to fly. Fed up with hitting the ground he, not unnaturally, didn’t even try. Net result:- he never built up the strength in his breast muscles that was needed to fly. To this day he cannot fly. He can safely flap to the floor but that is all. It does mean that he can come out in the garden without a harness (although he did once end up flapping frantically in the fish pond!) but this is no life for a creature that was built to fly. So, baby parrots must be allowed to build up the strength in their breast muscles.

Oscar and Suki are the only other parrots I have that I had from babies. They were both very capable of flying when they came home.

All of my other parrots were a little older and could all fly when they came home. So, how did I treat these? Well a home is full of many dangers (windows, mirrors, light fittings, TVs, ornaments etc etc etc). My view is that if a parrot has the ability to fly, I clip his wings when he first comes home to calm him down a bit; make him less panicky in a strange environment and thus less likely to harm himself. This usually works for me and when his flight feathers re-grow they are left alone so he can fly properly around my home but being aware of the hazards.

Do I clip one wing or both? BOTH – every time. It is cruel putting a parrot off-balance by only clipping one wing. It is also pointless because he will compensate for this! No, you need to clip both wings the same. That way he can still fly straight, but only downwards. That is the theory anyway!

NEVER clip the outer 2 flight feathers on each wing. A parrot uses these to hold his wings up on his back when he is relaxing. It’s a bit like me giving you a weight to hold out in front of you when you are relaxing and saying you are not allowed to rest it anywhere!

So you start with the 3rd feather in from the outer edge and cut off about 5 feathers to half their length. Then see if he can gain height whilst flying. If he can’t then job done! If he can then you need to cut more (either more off the feathers you have already cut, to make them shorter, or more feathers (still leaving the outer two).

A word of caution! IF you cut the feathers too short, you will find the cut ends rub on the bird’s body and cause irritation and possibly inflammation. Irritation on a parrot’s skin is one of the main causes of feather plucking and you NEVER want to do anything which might lead to feather plucking by your bird!

Kenny was clipped when we started taking him on holiday. He was tame enough to stay with me but imagine our horror when one day he took off in the caravan site and flew across to a nearby hedge. To make matters worse, Kenny is green and was difficult to spot in the hedge. Imagine how devastated I felt (and then relieved when we found him).

We clipped Billie, Oscar and Magic when they first came home. Billie was a very strong bird and no matter how much I cut off he still defied me by standing on the floor and flying up to his perch/stand! Oscar and Magic, being smaller birds, flap their wings so much faster than the bigger birds, that they too were able to fly very well with what I considered to be the maximum I was prepared to cut off. So sometimes clipping simply does not work. I have to say that, Coco, Billie, Suki, Kenny and Sydney have had all of their flight feathers regrow and are now fully flighted. Tahla, Oscar and Magic remain clipped at the moment though all are capable of gaining height in flight! When their flight feathers re-grow they will be left unclipped.

Much better than clipping wings is to train them to fly to you on calling (though never take the risk outside).